Connect with Councilmember Juarez and your cross-district neighbors, including discussion of priorities identified in our previous forum.  We will also have introductions from various D5 community groups.

Light refreshments will be served.  Hope to see you there!
For more information and to RSVP please visit Facebook!

We are looking forward to seeing you at our next General Meeting!  You can RSVP on Facebook

The Environment and Climate Caucus of the 46th LD Democrats is pleased to announce the program for our February 15, 2018 general membership meeting- a panel of community leaders will discuss Climate Change - What We Can Do! Our discussion will focus on pending and recent state legislation, a state ballot initiative, resolutions supported by the Washington State Democrats, and actions you can take now! Speakers will also respond to audience questions.

Please join us to welcome:

Aiko Schaefer- Aiko is the Director of Front & Centered, a statewide coalition of community of color organizations and leaders shaping statewide public policy decisions. She is also the Co-Chair of the Steering Committee of the Alliance for Jobs & Clean Energy, a broad-based coalition working to put a ballot measure to address climate change before voters this November. Aiko has spent more than 20 years engaging other people of color and those with lower incomes to advocate for equity and justice. She was the founding Director of the Statewide Poverty Action Network, Washington State’s largest anti-poverty advocacy organization. She has also served the Communications and External Relations Director of the Washington State Budget & Policy Center and was an invited Lecturer and faculty member of the University of Washington for 7 years. Aiko has lived in Maple Leaf/46th LD for 16 years with her husband and two children.

Jamie Margolin- Jamie is a 16-year-old climate justice ambassador with Plant for the Planet. She’s a plaintiff on the Our Children’s Trust Youth v. Government lawsuit in Washington state, where she and other youth are holding the WA State government accountable for the future they are leaving for her generation. She’s also the founder and executive director of Zero Hour, a youth led emergency climate action movement, delivering demands to leaders for exactly what it will take to ensure youth a livable future. They are planning a major student mobilization in DC this summer and an accompanying direct action to tell our leaders that generation Z has had enough and that it’s zero hour to act on climate!

Ken Lans- Ken is a founding member of Washington Physicians for Social Responsibility (WPSR) and a retired general practice physician. He first became involved with WPSR as one of the founding chapter board members in 1979 upon moving here just after finishing medical school. Ken has become increasingly concerned about the threat of climate change. He completed public action and speaking training through Climate Reality Project and regularly puts that training to use as a member of WPSR’s Climate Change Task Force. He also represents WSPR in the Alliance for Jobs and Clean Energy.

Jesse Piedfort (Moderator)- Jesse is the Director of the Sierra Club Washington State Chapter and a former Executive Board member of the 46th LD Democrats. He’s also on the Advisory Board for the Washington Democracy Hub, which seeks to create a long-term movement agenda for democracy reform in Washington State. He is a native Washingtonian who loves the outdoors (especially fly fishing) and has a commitment to working at the intersection of climate, equity, and justice.

Doors open at 6:30! The program is from 7:00 to 7:40 and will be followed by the 46th LD Democrats general meeting. Please come early- many local environmental organizations will join us at tables before the meeting to share information about their missions and plans for the upcoming year!

The latest January Demogram is here! 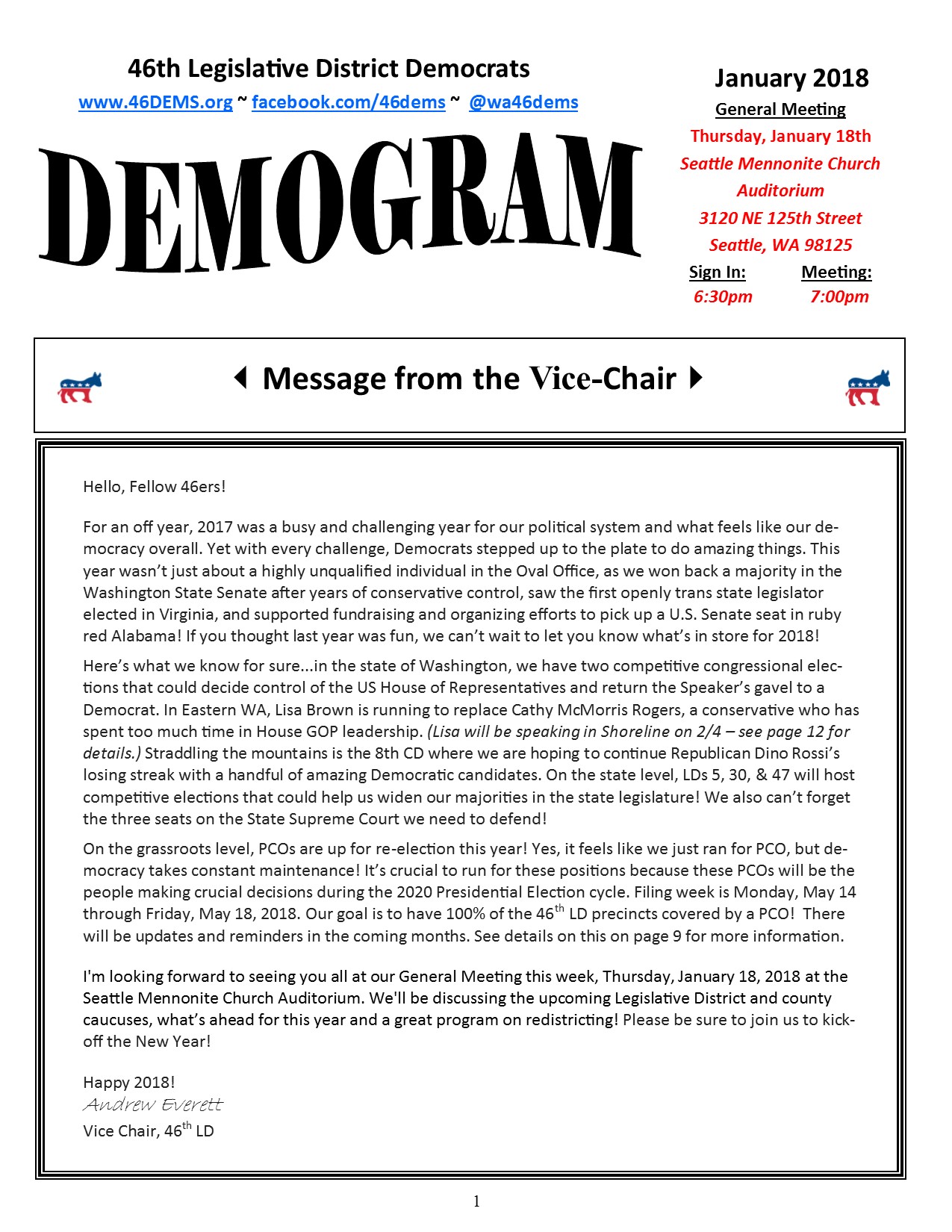